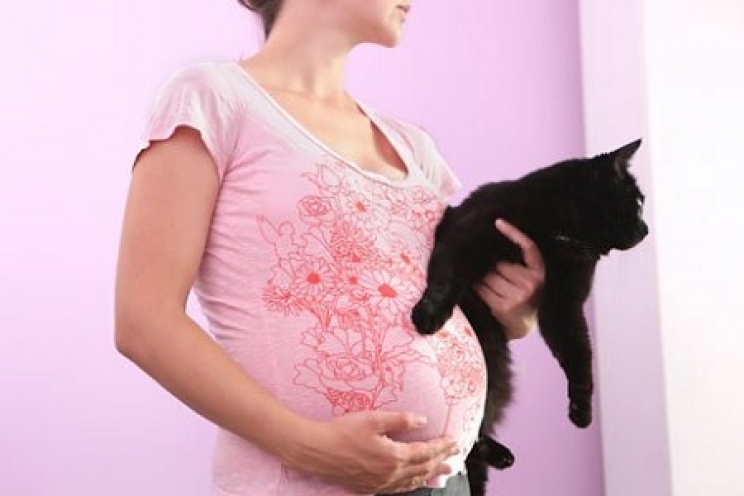 The cats Toxoplasmosis: what is it and what are the risks for pregnant women

In fact, it is a somewhat particular disease, because it does not give the cat any problems but it is very dangerous for pregnant women, because it can lead to one of the worst consequences: abortion.

Toxoplasmosis is a parasitic disease. It is caused by a microscopic parasite called Toxoplasma gondii, which has its "definitive host" in the cat: therefore, it can reproduce and lay its eggs only in the cat's intestine.

However, in our four-legged friend it does not give rise to any symptoms: despite living in his intestine, there is no diarrhoea, no fever, no lack of appetite ... In short, nothing at all. For this reason it is impossible to know if our cat is sick with toxoplasmosis or not, and we must always behave as if it were sick, to keep our baby and ourselves safe. Humans manifest the disease only, not cats.

In reality, as long as we are men or women who are not pregnant, it does not matter: in fact, toxoplasma will only give these people a little diarrhoea for a couple of days, which in any case is an annoying situation that is worthwhile avoiding.

The toxoplasma specimens that we ingested (we will see how in the following paragraph) will then be expelled with the feces and will return to the environment; if ingested by a cat, they will reproduce again and the cycle will begin again.

How is toxoplasmosis transmitted and avoided?

Toxoplasmosis is transmitted in one way only: with feces. With that being said, it might seem a bit disgusting, but it is a completely plausible mechanism.

The cat, in fact, lays its own feces that contain the "eggs" of toxoplasma. By the time the cat poops, these eggs are still immature, and cannot infect anyone; it takes about 24 hours for the eggs to mature, after that time the poop will have already dried out. Someone could step on it, especially if it was laid outdoors, and crumble it so that a person can breathe in the toxoplasma eggs, which are nothing more than specks of dust for us. This is how we can get infected.

The wind, however, could also carry these eggs onto a salad leaf, which we can eat; or on the grass, where our dog (not cat!) could roll and then shake, spreading the eggs in the air within reach of human breathing. 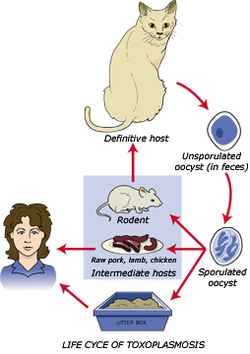 As we can see, the possibilities of contracting toxoplasmosis are many and it is impossible to predict them all. Doctors help pregnant women by handing over a list of foods to avoid as it is possible that eggs might have survived on them; often one of the tips is to get rid of the cat to avoid problems, but this is not true. Our cat can cuddle with us for the entire duration of pregnancy without any problems.

First of all, cats can transmit toxoplasmosis through their feces, not their fur. We can caress it and keep it on us as we see fit.

Second of all, as we said earlier, the eggs become mature after 24 hours, and when the poop is fresh it does not turn into dust we are able to breathe. The cat usually defecates in the litter box, and it is sufficient to clean it before 24 hours from the laying. If we clean it four times a day (morning, lunch time, late afternoon and after dinner) we can rest assured that the eggs will never be ready to be infectious. If we close them in a sealed garbage bag, and throw it in the bin, no one will get infected with our cat's feces. If we don't feel safe cleaning the litter box, let's have someone else do it, like our husband or a friend.

As we said before, despite the cat being the "source" of this disease which can also become very serious, following both the advice of doctors and those we have said now on the management of the cat feces, we will be able to live a peaceful and serene pregnancy without the constant fear of toxoplasmosis.