Mastitis in dogs and cats: what is it and how to treat it

Mastitis is defined as an inflammation of the breasts. For obvious reasons, it affects only females and in the case of pregnancy or phantom pregnancy.

It is important to understand the situation because the bacteria that cause inflammation are perfectly at ease in the milk, which feeds them: they can therefore multiply, then spread in the body causing much more serious damage, as well as being a problem for puppies who cannot get the milk.

Breasts are organs that work only in particular cases. In cats, they do it at the end of pregnancy, when there is the need of breastfeeding, in female dogs it is the same but they also do it in the so-called "pre-pregnancy", a particular situation in which the dog behaves like a pregnant (also producing milk) even if she physically has no puppy in its uterus.

One of the two main causes of mastitis are small trauma caused by puppy bites to the nipples. Small abrasions and scratches that can however become infected in contact with the external environment (hair, grass, floor) and, in the long run, also infect the milk. The bacteria present on the wounds, in fact, go up through nipple and enter the breast.

The other situation is when the milk remains in the breast because the mother has no one to breastfeed due to phantom pregnancy. In this case, the breast is swollen, the nipple tends to open and bacteria can enter the breast, infecting it.

In dogs or cats, we notice that they move little, eat little and in general are not feeling well: this depends on the infection, which caused fever.

The hungry puppies will try to take the nipple, but the mother will have pain and will tend to push them away, in some cases becoming aggressive due to the pain. The last test we can try is touching the breasts. If we feel they are hard, as if there were stones inside instead of the liquid milk, we contact a veterinarian as soon as we can because mastitis is present and it must be treated.

The last test to be carried out is to lightly squeeze the nipple to let out a few drops of milk: if this is not the normal white colour and tends to be greenish and dense, it will be pus, whilst in some cases it could be pink to indicate the presence of blood mixed with milk.

A situation of this kind could lead to the malnutrition of the babies, which are unable to extract milk from the mother. 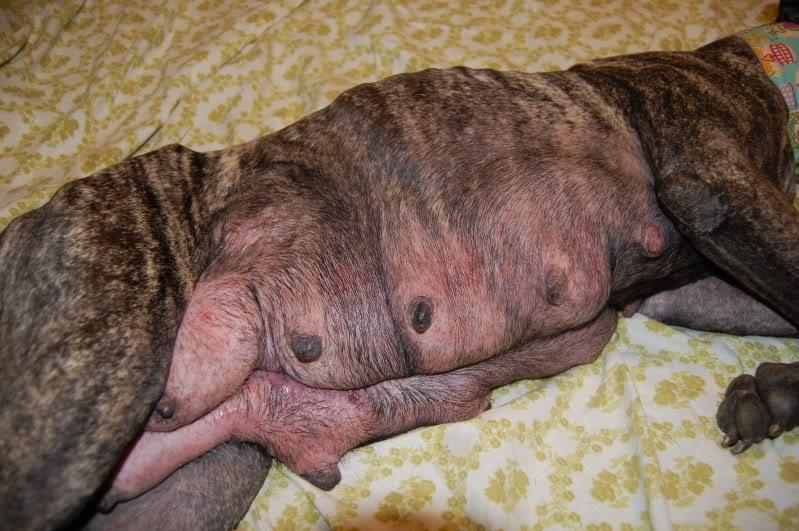 How to treat it?

Usually the veterinarian acts with antibiotic therapy. Compresses will be applied on the breasts and a correct diet that prevents the predisposing conditions for the disease will be assigned.

There is not much we can do to prevent this situation (it is usually quite spontaneous) other than to follow the normal hygienic rules. Keep the house clean and disinfected, or at least the area where the dog or cat is nursing.

If we realize that for a few days the animal has been trying to refuse its children who want to take milk and who constantly whine / meow with hunger, contact the veterinarian as soon as possible who will be able to provide  the necessary information.