Heat strokes in dogs and cats

Among the diseases that can affect a dog or a cat, the heat stroke is probably the most urgent. Death can occur in a very short time if we don’t act proptly.

It is important to know how to recognize the symptoms and know how to act immediately, even before taking the animal to the nearest veterinary clinic: 10-15 minutes of travel could be too much to reach the clinic.

What is heat stroke?

One of the functions necessary for animals is the regulation of body temperature. Vital organs only function in a certain range of temperatures, and each animal has its own methods of maintaining it: there are some like reptiles that "sunbathe", hibernating when it is cold so they do not lose heat and there are others , such as dogs or cats, which use the energy ingested with food.

When it is cold, the heat must be kept in the organism; when it is hot, it must be expelled. We do it with sweat. Cats and dogs don’t do this because they simply dont sweat.

If the heat expulsion mechanism stops working, it will accumulate in the body and be life-threatening.

Cats are generally less subjected because they are desert animals (felines in general) and control body heat better.

In any case, the expulsion of heat in pets takes place with the breath, with which warm humidity is released and the body temperature is lowered.

Because of some poisons that cause involuntary muscle contractions heat is generated. The typical situation are dog that remain tied up without water in the sun, or locked in the car in the sun in summer with the windows closed.

As long as the animal has moisture in its body that conveys the heat to be expelled, it will do so simply by breathing; then it will remain dehydrated, and so the heat will remain inside the organism, bringing the temperature up to 40º-41º.

The first thing we notice is certainly the laboured breathing, which is accompanied by abundant salivation; due to the lack of water, saliva is very thick. The mucous membranes of the tongue and gums are visibly red.

This will start a series of typical symptoms: the animal will no longer control its muscles, so we will see involuntary muscle contractions accompanied by diarrhoea, often with the presence of blood, due to the fact that control is also lost on the intestinal muscles. Vomiting, on the other hand, is rarer.

This will lead to the incoordination of movements and then to fainting, small movements in search of points sheltered from the sun, and in some cases even convulsions. If you don't act quickly, coma and death can ensue. 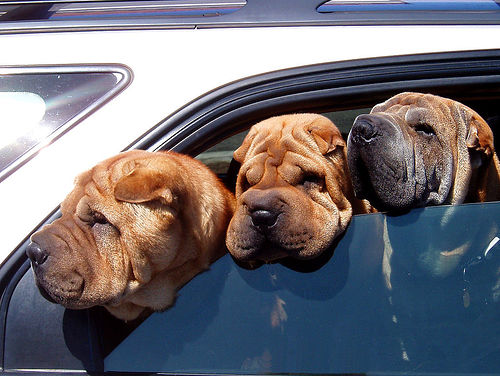 How to act to avoid heat strokes

Firstly, you need to see where the symptoms are: if you see a dog tied up in the sun that, however, behaves normally, provide a bowl of fresh water and try to track down the owner or contact the traffic police, who can bring it away without legal consequences with the owner. If a dog is locked in the car, you can theoretically break through the window (pursuant to article 54 of the penal code) but if you call the brigade, let them do it if the dog is still "awake".

When you have direct contact with the dog, if the state of heatstroke is advanced, first take him to the shade in a cooler place.

Provide water carefully: a little water at a time, because if they drink too much all together you risk suffocating. If you can get him to a vet quickly, the fluids will be given via a drip directly into a vein which is a safer way.

We must then spread water on the body in order to help the spread of heat on the outside, but here too we should also pay attention. We do not give ice or frozen water, because it would risk to "tighten" the vessels and less blood would flow through. The heat will be dissipated in the worse way possible.

If we have a fan available, let's aim it at the wet animal in order to favour its spread even more. If we have alcohol available, pour it into the points such as the neck and armpits where the blood vessels are more superficial, as it helps to dissipate heat.

When the animal begins to move again, or to "recover", let's take it immediately to a veterinary clinic. It would be a good idea to call as soon as we leave. If we call the clinic on time they will be able to prepare the room with all the precautions on time as soon as you get there. They will be able to immediately intervene without wasting any time, as well as helping you through the phone call on the spot when you are on your own.