Gastritis in dogs and cats: how to recognize it

This causes gastritis, (inflammation of the stomach) in a dog or cat to be much more debilitating than it would be, for example, in a horse.

Apart from being painful, gastritis also leads to another fundamental problem, which is malnutrition. Since the food is not digested, even if the animal ingests it, it does not absorb it, and the result is the same as not eating at all.

In order to digest food, the stomach, produces an acid, which we know as gastric juice. Ours produces a certain quantity while that of domestic animals much more, in proportion to us. The chemical formula of the juice is HCl, or Hydrochloric Acid, what we all have at home, diluted, as Muriatic Acid.

When things work well, the stomach produces acid by taking its starting components from the blood vessels. The acid not only digests the contents of the stomach, but also the stomach itself: fortunately, there is a regeneration mechanism that continuously recreates the internal mucosa of the stomach. Within 24 hours, the gastric mucosa (consumed on one side and recreated on the other) is completely new.

The problem of gastritis occurs when this mechanism stops working: if, for some reason, too much acid is produced or if the regeneration is not effective, the corrosion of the stomach overcomes the regeneration, which affects the deeper layers where there are blood vessels and nerves, causing severe pain as well as damage.

Gastritis may be due primarily to problems with the food:  rotten, toxic (for example an inedible mushroom) or indigestible material such as plastic. In this case, the pain will last as long as the food remains in the stomach, and is then generally expelled through vomiting, the stomach's defense mechanism.

There are also microorganisms that can cause gastritis as a primary effect; most bacteria and viruses are digested, just like meat, but some manage to resist and cause damage to the stomach wall, so that it becomes inflamed. Regeneration fails and we come across gastritis. In this case, solving it is more complex because it requires the intervention of a veterinarian to carry out a therapy with antibiotics suitable for killing these pathogenic microorganisms.

Drug abuse is another possibility that can lead to gastritis. Medicines, especially anti-inflammatories that we and our pets take when we have pain of any kind, ruin the stomach wall because they stimulate acid secretions. If the animal takes too many or if it takes human drugs (always ask the veterinarian for advice before giving one of our medicines to our dog or cat) this mechanism could be triggered which could cause gastritis. Clearly, it is important not to keep giving these medicines to our four-legged friend, because we would increase its pain.

The most serious situations of gastritis occur when there are other concomitant and difficult diseases to treat: among these, renal failure, liver failure and some types of tumours. In this case, gastritis is not a primary problem, but one of the many consequences of these situations: they clearly need to be resolved, but gastritis can be a wake-up call to understand that such problems exist, and report them to our veterinarian.

How to notice gastritis

How is gastritis detected? The main symptom is vomiting, possibly with the presence of some blood. Let's always look at it before cleaning it.

He does not play, moves little, does not eat, and if the pain is so much he could put himself in a particular position, called "Muslim prayer" (which recalls the particular posture in which Muslims pose when they pray): front legs forward, head close to the floor and rear raised. 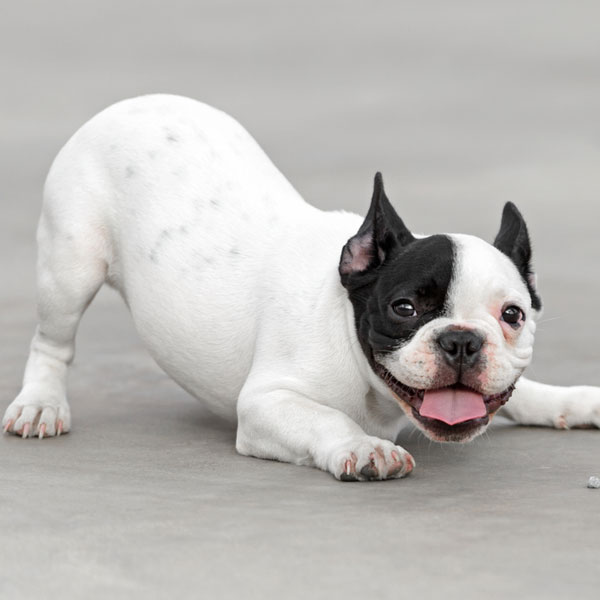 If we have any doubts, we can lightly massage the animal's belly: if it has pain, it will tend to "close up like a hedgehog" and in some cases, it will try to scratch and bite us.

If this situation continues over time, it is good to take him for a visit, which will certainly help him. He feels a lot of pain.