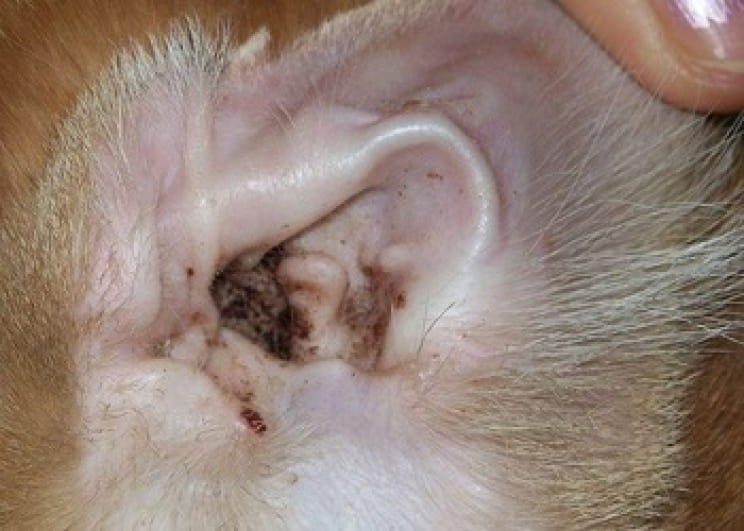 ear diseases in dogs and cats: causes and remedies

It might have happened to us that we noticed some strange behaviors in our pet. They shake their heads, keeps their head tilted or scratch themselves violently: these might be common signs of a possible ear disease and can be very annoying for our pet. In this articles we will be focusing on the most common diseases present in our dogs and cats ear and how to approach them.

Otitis in dogs and cats

We talk about otitis in the case of an ear inflammation or infection. Otitis can affect the three different parts the ear is divided in. We can come across either external otitis when the infection is found in the external part of the eardrum (going from the outside of the ear to the eardrum), medium otitis when the inflammation is found at the back of the eardrum or internal otitis (very rare) which infects the part of the ear that recognizes sound vibrations and sends stimuli to the brain.

In general, we might as well notice symptoms of external otitis on our own: it mainly affects dogs with hanging ears. The auditory conduct is warm and humid and therefore an ideal habitat for bacteria to live and reproduce. Instead of seeing the typical baby pink color on the ear and yellowish earwax inside, the visible part of the ear will turn out a "chocolate color" and we might come across some black secretions, therefore it is much darker than usual. It is recommended to bring your dog to the vet. However, in the meantime you might relieve the pain with some warm oil (Not boiling hot!) inside the ear canal. The oil has an anti-inflammatory effect and disinfects the area without producing any damage.

Medium and internal otitis both in dogs and cats is more devious because we cant identify them from outside, the animal will however still feel the pain. If we cant see anything, but our pet still acts weird in the mentioned ways above, we must bring them to the vet so that the animal will have an antibiotic treatment and return to its normal condition. We should never underestimate this disease: a medium otitis without treatment might lead to an internal otitis which might lead to irreversible damage inside the ear such as deafness.

Auditory mange in dogs and cats

If otitis is provoked by bacteria, mange is something similar but it is provoked by mites (Notoedres in our cat and Otodectes in our dog). They only affect the outer ear of our pet. Mites will feed on our dogs or cats skin and will tend to diffuse in other parts of the ear such as the auricle (the protruding part of the ear).

The animal will start to feel really itchy and the owner might come across some crusts due to the intense scratching. Moreover, the fur around the ear will progressively start to fall off. The animal should immediately be brought to a vet. In the long run, this situation might also lead to bacteria entering the ear which will provoke otitis. In some other cases there might be a diffusion of the mange in other parts of the animals body.

Foreign bodies in our cat's and dog's ear

These might be one of the most painful situations ever and definitely most dangerous if not treated accordingly. These are the well known foxtails.

They affect indifferently cats and dogs and are very commonly-found plants in the flower beds in our cities. (from March until June mostly). They have a very dangerous fish bone structure and insert themselves from the pointed part of the leaf. They "walk" on the dogs ear always pushing forward. When they eventually reach the eardrum they can pierce through it and provoke serious and dangerous damage to our pet. As a consequence, they could also cause deafness in our animal.

We will notice the dog scratching himself very often and in some cases we might even come across otitis. The animal will tilt and move its head repeatedly. But be careful, once the pain starts, the foxtail disappears from naked eye and we can only see it through a special tool called the otoscope. In case you see a section of the foxtail, dont remove it, instead, bring the dog to a vet who is aware of the procedures. There is the risk of breaking the foxtial if you attempt to remove it at home and that would not make things better at all.

Otohematoma in dogs and cats (blood clot in the ear)

It is more common in dogs as they have bigger ears than cats. The causes of an otohematoma are generally due to violent scratching or some sort of trauma, maybe another dogs bite during recreational time.

Eventhough the trauma was not that intense to leave bruises or marks on the skin, the incident might have still broken some capillaries in the auricle (visible part of the ear). The blood will spill out of the capillary and will accumulate and the ear will swell like a balloon.

If we bring our dog to the vet in time, the professional will create a small cut on the ear and allow the blood to spill out. If we wait for too long, the hematoma (blood) will become hard and will not be liquid enough to flow out on its own with a simple cut. In this case, it is necessary to intervene with a more complex surgery to remove this hard "ball" of blood created from inside the ear.

So, if we come across an anomalous swelling (it will be easy to recognize because it will only appear on one of the two ears, the other one will appear as normal) bring your four-legged friend to a vet for a revision. Waiting will just make things worse for him!