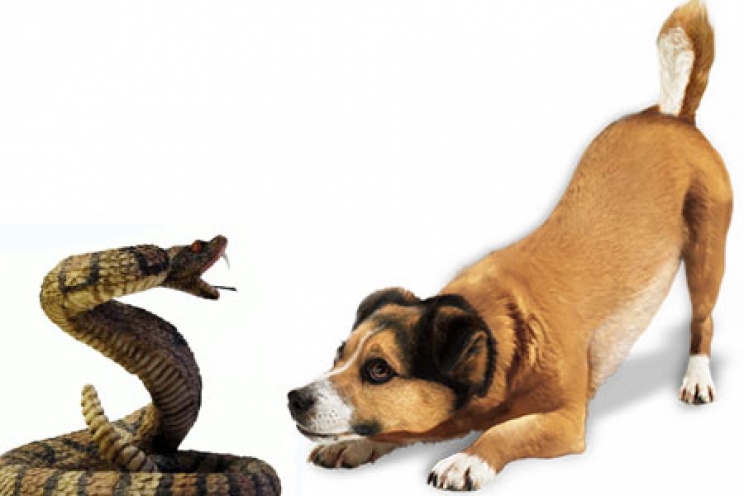 Snake bites on dogs and cats: symptoms and remedies

Dogs and cats who live outdoors have a great time when they have the opportunity to hunt insects and small animals, which is generally not a problem for the health of our four-legged friends, unless we are referring to poisonous snakes, like the dreaded viper. How do you recognize this snake and what are the immediate symptoms and remedies in case of a bite?

Most of us are horrified at the thought of finding a lizard in the house, so let alone how we might react to a snake. In these cases, our mind immediately begins to think of the most catastrophic consequences.

In fact, unless we are on holiday in the jungle or near a zoo, it is very difficult that one of these dreaded creatures could end up in our garden by mistake. Usually, in fact, those crawling animals collected here and there by our cat are simply grass snakes.

However, we must not exclude the risk of a poisonous snakebite, a far more dangerous one than the common country snake. That's why it's important to know how to distinguish these two reptiles.

The garden snake (Natrix natrix) is a dark green or brown colour, with a characteristic yellow collar in the part just behind the head. In fact, the common name of this snake is also "collar snake". The dimensions can vary from a few centimetres, for the younger ones, up to even 2 meters in the swampy areas.

The rat snake (Hierophis viridiflavus or Coluber viridiflavus) on the other hand is generally black, interspersed with thin yellow-green streaks, whilst the whole lower part is clear. The dimensions are similar to those of the grass snake, although they usually remain within 120-130 centimetres 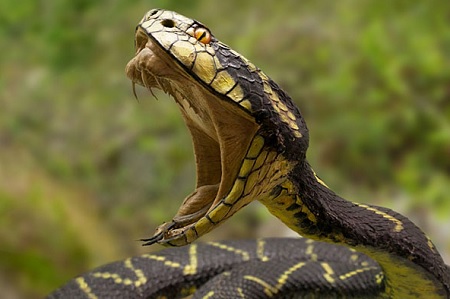 The case of the viper (Vipera aspis) is different, as it is the only poisonous snake in Italy. Here are the characteristics that we must keep in mind to distinguish it from grass and rat snakes:

The color is not a distinctive feature, because the vipers can take on variable coluors from grey to brown, up to reddish, depending on the soil in which they live. The dimensions are rather small compared to the maximum dimensions of the other two snakes, since they do not exceed 94 centimetres.

Vipers have tiny glands at the bottom of the palate, called venom fangs, precisely because they produce and contain the poison, which can be released through small ducts located in the teeth. The poison is very dangerous, in some cases even lethal.

If the viper has bitten our dog or cat, we can notice it due to the presence of two small holes with a distance of about 1 centimetre from each other.

The symptoms of viper bite include:

The final and lethal consequences of the viper bite appear when the poison has compromised the functionality of the kidney and liver.

How to intervene in the event of a bite

The first thing to do is to rush to the vet as soon as possible. It is clear that in some cases time can become a precious weapon, so it may be necessary to intervene alone. 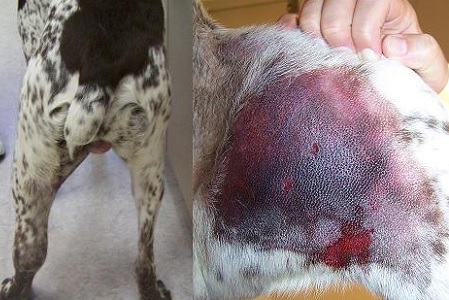 These are only the preliminary operations, essential to save time before reaching the vet. Do not wait unnecessarily for the situation to improve on its own, because most likely it will not, it will continue to get worse. The veterinarian will be able to intervene on the symptoms by administering the anti-viper serum if normal therapies do not work.

What we absolutely must not do is:

How to prevent encounters with vipers

Vipers are generally more dangerous in spring. In any case, these are not aggressive animals under normal conditions. This means that if they are not annoyed or threatened, they will not attack. This aspect can be useful for us, of course, but not for our four-legged friends, who often cannot resist the temptation to chase everything that moves around.

For this reason, the only thing we can do is try to reduce the chances of running into a viper. We can therefore avoid too isolated peripheral places, especially in the open countryside. If we see a viper, we must try to stay calm. Let's move away slowly, without making too much noise, returning along the busiest street. Any abrupt movement by us or by our dog could trigger the viper in our direction.

If, on the other hand, the dog has already encountered the snake and we are trying to call him back home, use a stick to repeatedly hit the ground. The vibrations will make the viper escape.